Party in the Apocalypse

Party In The Apocalypse. ‘PITA’ is the (COVID-safe) urban rendition of the late, great PITP and is inspired by the wild times that we're living in. With a fresh perspective on the word 'Apocalypse' and its origin meaning of fundamental change, it’s an important time for music, culture and art to stay alive.
On the 3rd and 4th December, this two day, non-camping music & arts festival will take place at Churchill Park in Launceston, bringing some of the country’s best bands to the state for one of the biggest lineups to hit Tassie since COVID began. 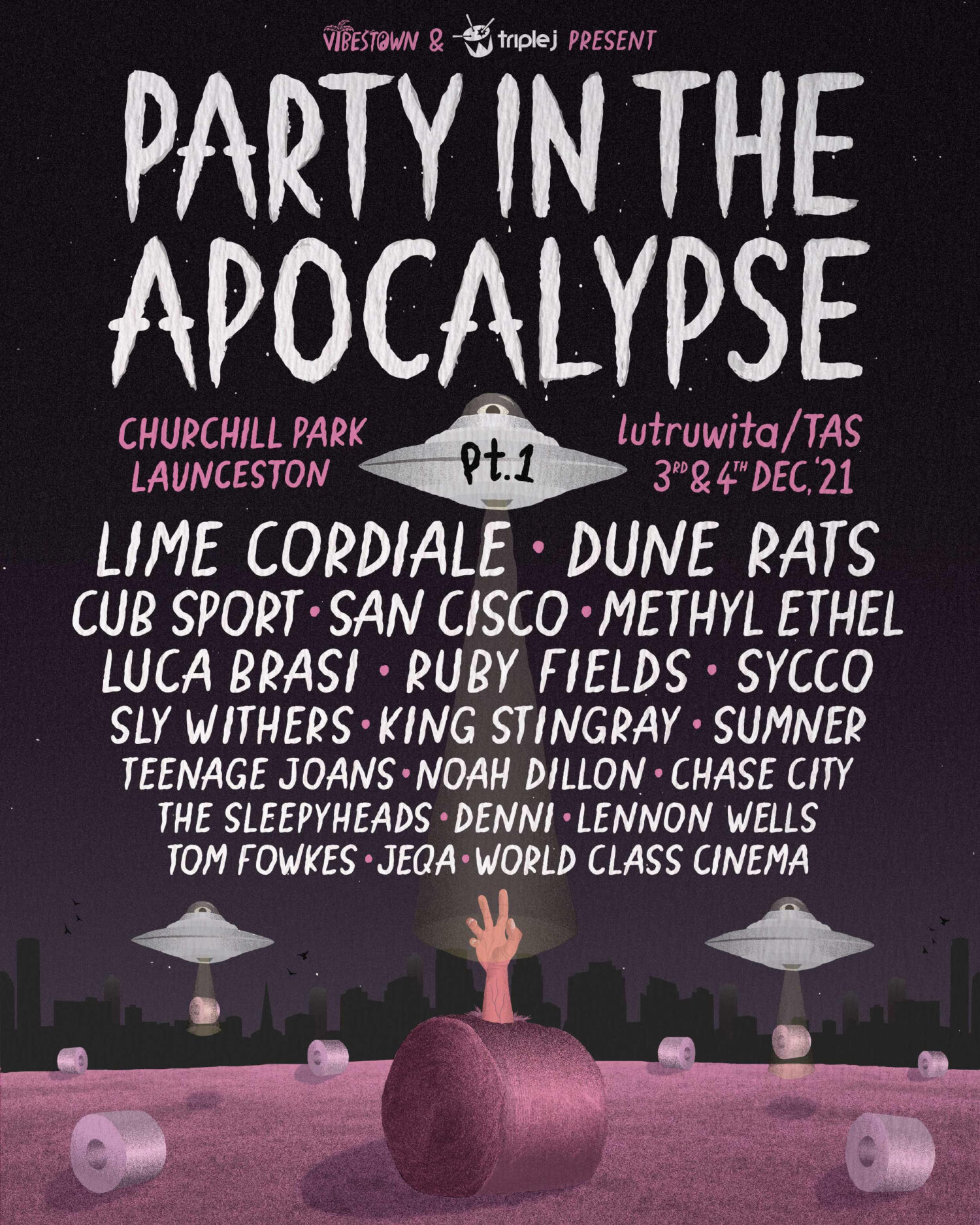 The Basin is back! One of Tassie’s most iconic music festivals, ‘The Basin Concert’ was brought back to life March 26th-27th 2021 via a successful 2021 COVID-safe rendition, ‘The Basin-ish Concert’ took place at Inveresk Precinct. For two huge days and nights of music and festive celebration, the re-imagined Vibestown event provided something fresh for generations of festival lovers across the state and beyond, while paying homage to the long history of the event. Once known for holding the title of Australia’s longest-running outdoor concert, spanning for more than 30 consecutive years, The Basin Concert was established in 1969 ~ It’s time to bring more of those good times back this summer! 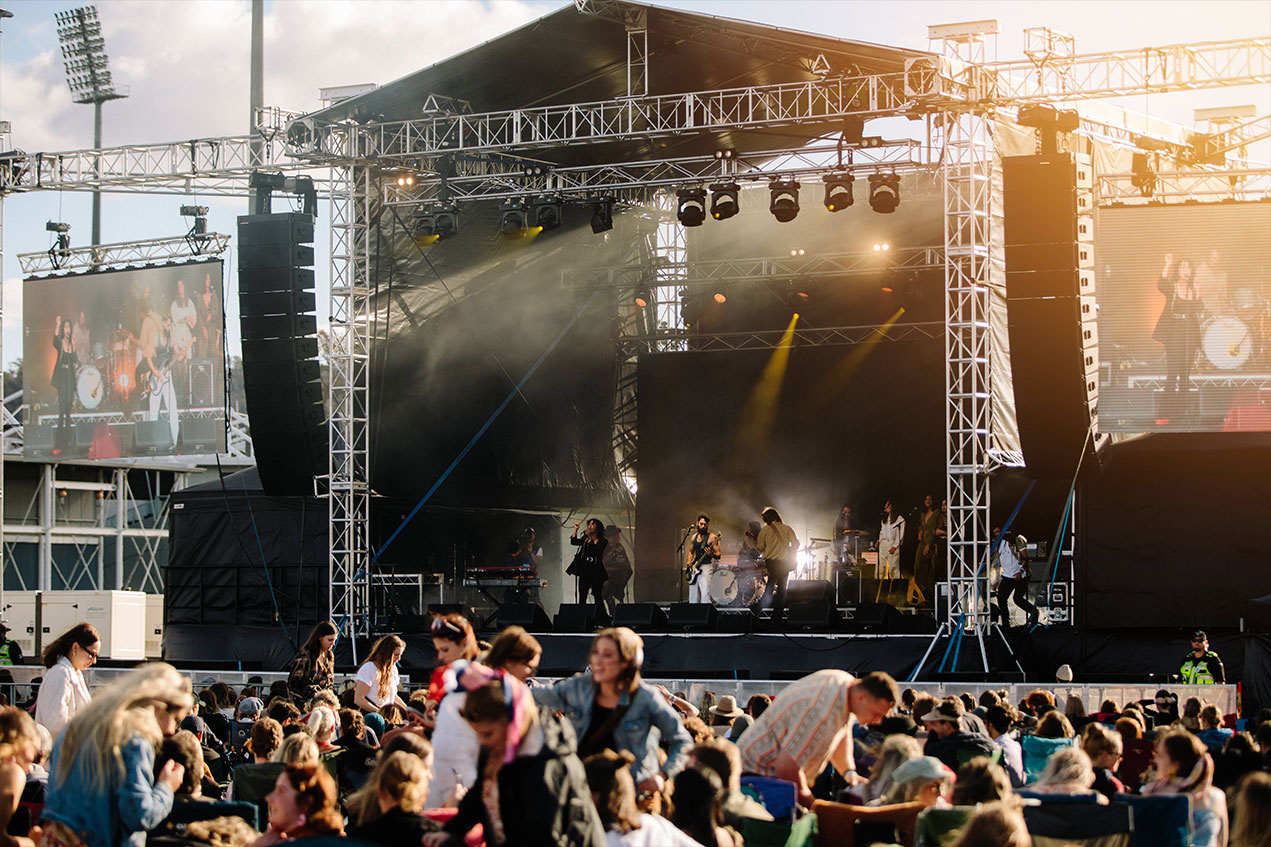 Party In the Paddock

Rest In Party 💀 2012 ~ 2020 ✨
The notorious PITP spanned for close to a decade and became a staple for many young festival goers across the country. From it’s humble origins as founder Jesse Higgs’ 21st birthday party and mainstages made of hay bales, it evolved rapidly into one of the countries most celebrated music festivals, maxing out at 9000 punters 8 years on. Gaining the support of AUS radio champions triple j in 2016, PITP went on to book some of the country's greatest bands of the last decade, including internationals ‘Lily Allen’ and California’s ‘Grouplove’ to name a few, “One of the best festivals we’ve ever played. It’s what you hope festivals are like…” Grouplove, 2018. This regional-boutique-wonderland ordained a cult following unlike no other and became famous for it’s ridiculously scenic location, incredibly solid and beautifully diverse lineups, championing of safe spaces for its diverse audience, a strong environmental sustainability and ethos. All in all; it's goood vibez… Rest in Party... 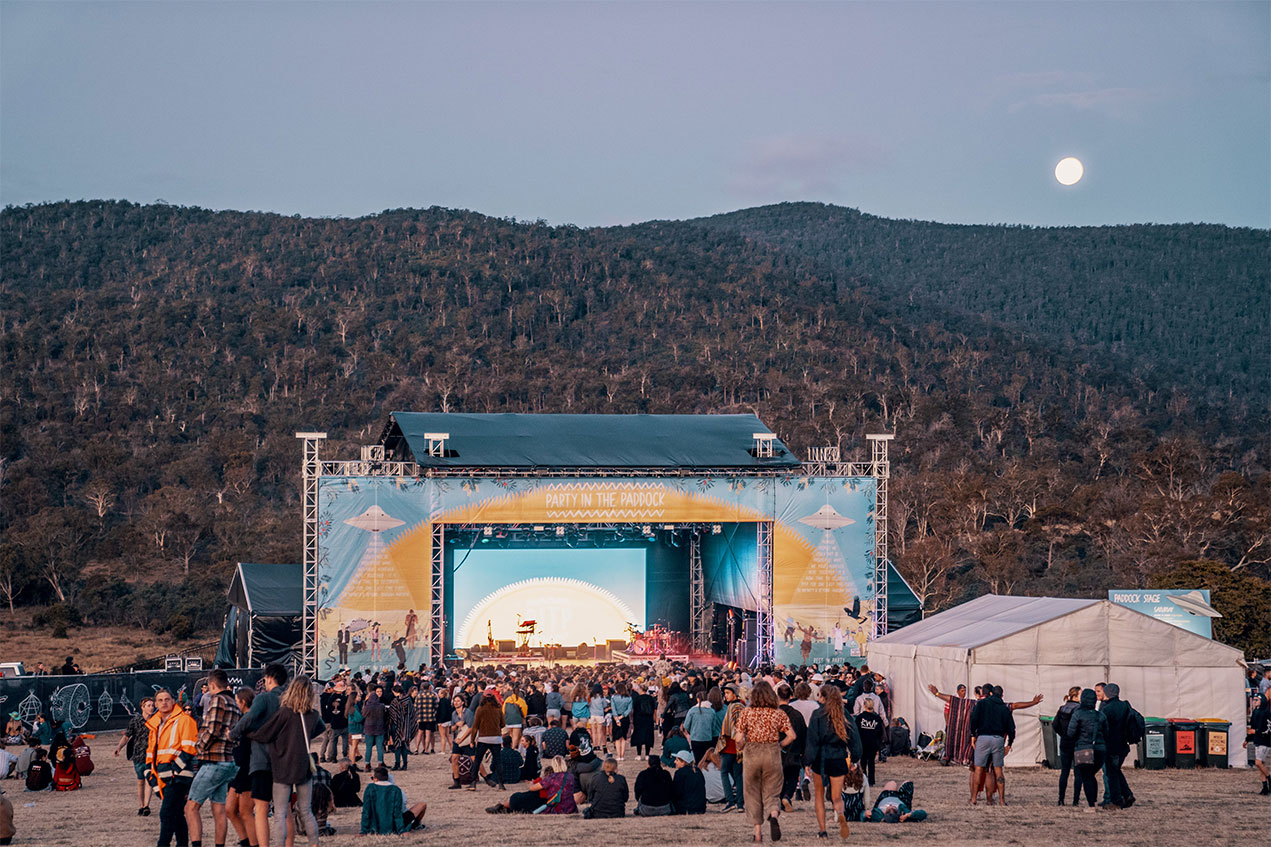 'Til the Wheels Fall Off

Til The Wheels Fall Off, needs a seatbelt warning before entering! It’s general knowledge that this notorious Tassie weekender is just a great excuse for local punk royalty ‘Luca Brasi’ to get all of their best mates and favourite bands together for one hell of a bender! Although the amount of Red Boags consumed is on par with the amount of brilliant live music, featuring some of the country's best up and coming punk music and heavier rock genre artists. TTWFO was founded by the ‘Luca’ boys themselves back in 2014 and has very much enjoyed a blistering 6 years, taking a pause in 2020 to assess if “the wheels have fallen off” yet! Who knows what looms around the COVID corner, hopefully more of these weekends! 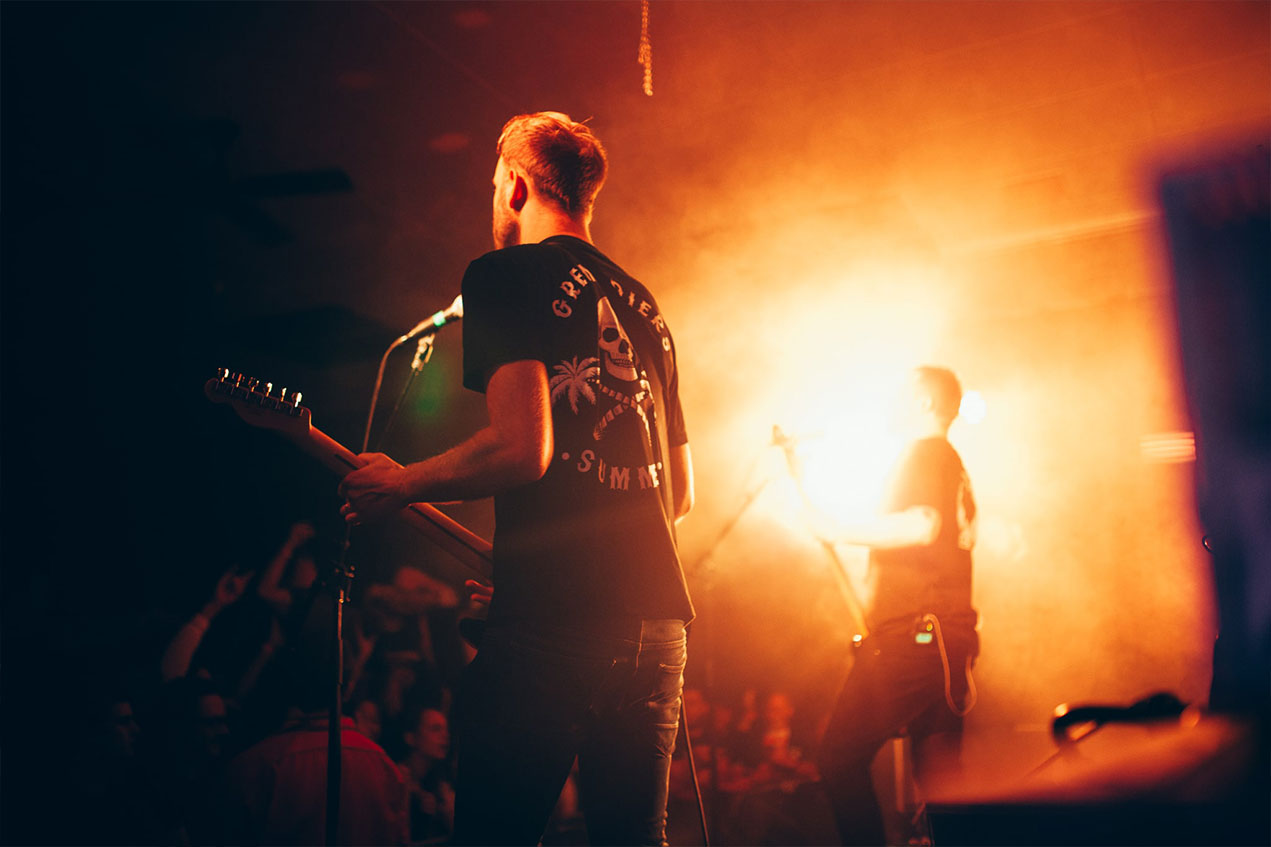 For a two year stint, from 2016-2017 Vibestown took on the honorary role of running Launceston's official NYE festival. Held on the waterfront of Royal Park, Royal Eve had an annual turnout of 6500 punters and provided the greater Launceston community with something special to do on NYE. Featuring local and interstate musical lineups with acts such as Blue King Brown and The Wolfe Brothers, the festival also had a big emphasis on family fun activities and the highly anticipated NYE fireworks. Royal Eve was a great time for many and an all inclusive NYE celebration for everyone. 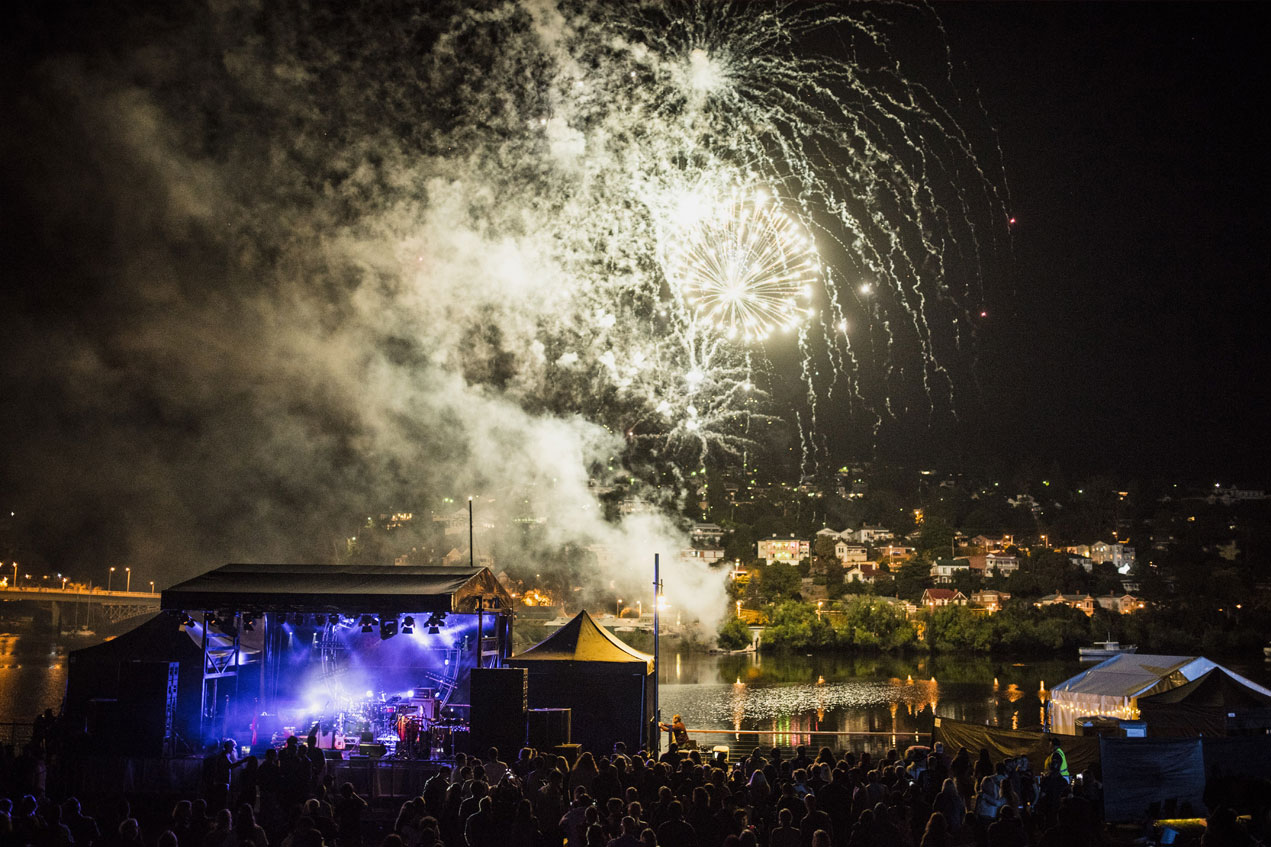